Our possibly oldest member, James Cain of Culcheth died recently at the age of 96 years and 1 day.

I first encountered James some 25 years ago on a walk he was leading for the North and Mid Cheshire RA and it was the great cirque of Edale - te full bifters. It was a fitting tough and demanding venture by one who by reputation did not take prisoners. However half way round he showed his (limited) compassionate side by diving into the Nags Head, declaring it “beer time.” 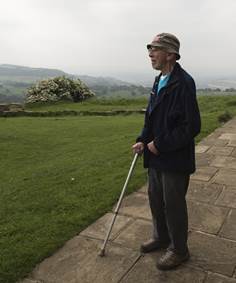 We became good friends sharing a love of visiting and recording the individual numbers of OS Triangulation pillars. It was only of late that I overtook his total, reported the fact to him and was promptly called a “ratbag”. That was truly a term of endearment he used and not many were graced with it!

His mountain and hill climbing achievements were legion - all the Wainwrights, every one of the 440 plus Nuttalls (which we know as Mintos), ie the 2,000 plus feet tops of England and Wales and long distance paths galore - Pennine Way several times, Coast to Coast, Cotswold Way, the massive South Wales to North Wales over every summit on or off piste, and for good measure Lands End to John o’ Groats. I accompanied him on his final Nuttall, Pillar Rock, with the assistance of a rock climbing guide. Having climbed the summit he was given the option of abseiling off but declined and climbed down secured by but not using the rope. On returning we had to wade a river which James promptly sat in! But the bottle of celebratory Glennfiddich he had brought enlivened us both. 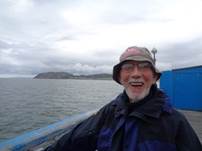 He joined PNFS as a 10 year member and in my run-up to becoming chairman he attended the then-rumbustuous monthly council meetings - long dispensed with not least down to James’s advice to me on the subject. He attended AGMs and half year meetings, usually wearing his bobble hat which stayed in place and when bored with proceedings would feign sleep but, be not fooled, he never really was.

James was truly a man for all seasons, a colossus, and he leaves the world a poorer place. If there are heavenly hills he will already have ticked them off! I am proud to have known him. Rest in Peace Jimbo.