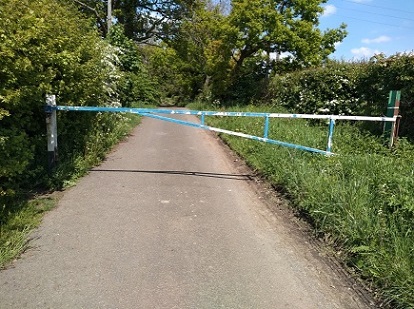 In August I heard from Derbyshire County Council that the metal barrier shown in the first photograph had been removed by the landowner. It is situated on Codnor Restricted Byway (RB) 35 (known as Lodge Lane) in the Amber Valley district of the county, about 2 miles north of the town of Heanor off the A610 Nottingham Road. This RB was only added to the Definitive Map and Statement (DM&S) just over 12 months ago based on historic evidence going back to an C18th Enclosure Award. This section of it is metalled and confined between hedgerows. The metal barrier had a lock at the left hand end requiring a number code to unlock it. An RB should be usable by walkers, horse riders, carriage drivers and cyclists. This was impossible for the latter three categories and extremely difficult for walkers unless you squeezed through a tiny gap at the left end, pressing yourself into a hawthorn hedge. 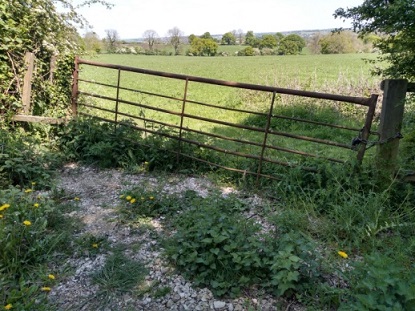 I reported this issue, and others further on, to DCC 12 months ago as I am inspector for Codnor Parish. I had to wait until I knew that the Order adding it to the DM&S had been confirmed. A year on and I returned to check on progress to find that there had been none. This was despite assurances from officers that the landowners had been told to remove obstructions on the RB and that progress had been made.

I sought, and was given, authority by the Courts & Inquiries Committee to serve the initial notice under section 130a of the Highways Act 1980 requiring DCC to get the barrier removed (and the other obstructions further on). I informed DCC of this but gave them further time (until the end of July), to get things sorted otherwise I would serve the notices. I was promised progress by the officer dealing with this case who had received an assurance by the barrier's owner that it would be removed. On the morning I was writing this article, I received an email telling me that it had been removed. The barrier was at grid reference SK 4313 4883. 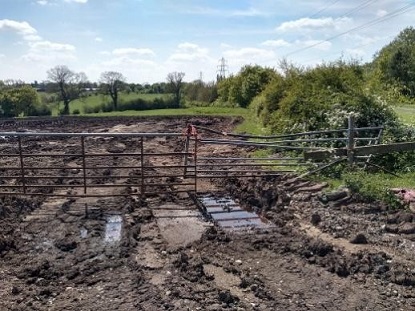 There are other issues on the RB further north. Where the RB changes from an enclosed route to one running along the edge of a field, open on one side there is another padlocked field gate preventing progress to all but walkers (a public footpath goes off the RB at this point hence the wooden stile). The second photo shows this as yet unresolved obstruction for which I have authority under s.130a.

The open field section runs in the adjacent parish of Aldecar and Langley Mill for which I'm also the inspector. The RB section here is RB52. The third photo shows the junction of this RB with another RB called Castle Lane. I was standing on Castle Lane when I took the 3rd photo looking back through the obstructing tied up gates which prevents anyone getting through. I had to climb over an adjacent fence. I have authority under s.130a for this blockage. The field beyond is churned up by tractors and used as a manure heap. The surface of the RB is unusable given its legal use by walkers, horse riders, carriage drivers and cyclists so I also have authority to serve notice under section 56 of the Highways Act 1980 for a surface "out of repair". Perhaps by the time of a future magazine, I can report the resolution of these additional issues.

Next: Windows at Taylor House