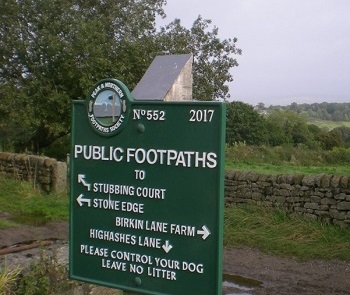 It's nice to discover a new walking route close to home. On recent walks I had come across waymark arrows for the Chesterfield Round so decided to investigate. It has a good web presence at https://chesterfieldramblers.com/chesterfieldroundwalk/ where a guide is downloadable along with the route in gpx format. Thirty four miles sounded like two good days and with access by bus from home it was a perfect challenge. Shame I committed to a weekend with a poor forecast but there was no backing out so off we go.

Starting at Clay Cross a link path proved impossible but once on the Round the signage was good and paths to the usual Derbyshire standard. Launched in 2005 it's good to see that the local RA group still maintain signs and publicity and in places RA volunteers have installed stiles and gates which suggests some sections were difficult before the route was devised. The west side skirts the Peak District park boundary so the countryside mirrors more familiar paths further west with gritstone walls and rolling terrain with very little arable cultivation. Some excellent view points, many with sight of the famous crooked spire of Chesterfield. The route has a series of well positioned information boards at either view points or in popular locations which should invite others to explore the whole route. There are other bus links to split the thirty miles into shorter sections so it should appeal to all abilities. The drawback on the west side is the lack of services or perhaps I honestly mean pubs. We pass a rather posh hotel at Stone Edge and get tantalisingly close to Holymoorside so after Linacre Reservoir we make a small detour to The Gate, just in time as the heavens open. 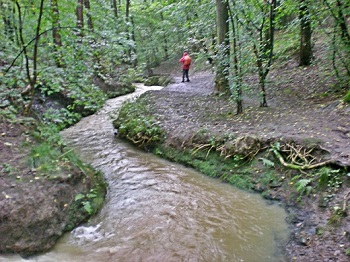 The route crosses the A61 Chesterfield to Sheffield road over a bridge that is more familiar from below while making the trip by car to walk at Hathersage or beyond. We put a spurt on to Unstone for the bus but on the way another board is perfectly located to offer a view south over Chesterfield. Much rain over night and our departure from Unstone has a torrent on the road. We are heading east along the top of the Round close to West, Middle and Nether Handleys. The walk then turns south to cross the Chesterfield canal. Here I was surprised to see a boat on the move. A bedraggled novice steerer grappling with the tiller of a day boat, in the rain while the child on board played pirates.

The route includes an interesting path through the urban sprawl east of Chesterfield and we pause in Brimington church porch for lunch. Above Ringwood Hall a strange tree turns out to be a disguised telecommunication mast. I take the wrong path in West Wood and then it's impossible to cross the raging stream forcing a detour so when the path meets the road at Calow by an Inn, in we go. More torrential rain prevents a swift half and when we manage to leave a river has formed down the field and then disappears under a barn door. The skeleton of Sutton Scarsdale Hall looks especially daunting on this dark damp day, fencing now surrounds the structure that we once were able to explore at close quarters. 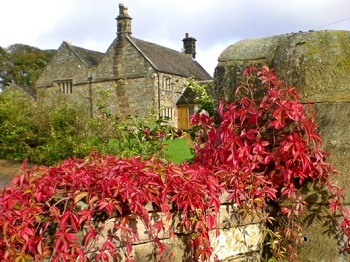 The M1 motorway is now seen and heard. We cross the A617 close to junction 29 and turn west and we join the Five Pits Trail. Easy walking for a few miles along what were rail lines serving the many collieries. The once ugly spoil heaps are now green with trees and bushes. Not far now past North Wingfield but then a flooded and fenced path obstructs us so we are forced to take to the road and hop back on the bus at Tupton rather than a road walk to Clay Cross. A great walk, even in the rain. Ten stars, give it a go.

Next: Reopening the Public Footpath Through Browns Houses at Silverdale