Reopening the Public Footpath Through Browns Houses at Silverdale

In January this year a public inquiry was held in Carnforth over five days before a Planning Inspector to decide whether there was a public footpath above the sea wall at Browns Houses in Silverdale. This arose as a result of an application to amend the Definitive Map of Lancashire Rights of Way by the Society. We were requested to act by local people who were aggrieved that they were being denied use of a path which they had always used to walk from the end of Lindeth Road, along a track above the sea wall and through a gate onto the foreshore. The alternative route along the foreshore is badly eroded and covered by sea water when tides are high. This route is difficult to use at all times by the elderly.

The case for recognising this route as public was presented by Lancashire County Council and was based on evidence from walkers who had used the path in the past, maps showing the route from the eighteenth century onwards, surveys by the parish council and statements from previous owners of Browns Houses. The present owners of Browns Houses who opposed the application had a full opportunity to put the case against the track having public status. 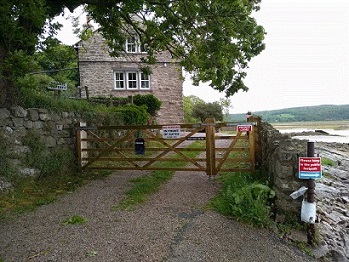 Following the Inspector's decision the owners of Browns Houses have erected a number of signs at both ends of the path stating the land is private. Whilst these signs are lawful, almost all public footpaths are over private land, they are clearly intended to discourage use of the path above the sea wall. There is also a further sign directing walkers onto the public path along the foreshore.

To make the situation clearer on the ground and to give walkers confidence to use the track above the sea wall the Society intends to erect a metal sign showing clearly the line of both the footpath along the foreshore and that through Browns Houses. We understand that the Council will be erecting a sign near the tree on the foreshore at the other end of the path.

The effect of our victory is that there is now a definitive footpath passing through the pedestrian gate at the side of the field gate, along the track above the sea wall and then through a gate onto the foreshore. Do feel free to use this route despite the discouraging notices.

The Society hopes very much that this route is adopted as part of the England Coastal Path. The Silverdale to Cleveleys section is presently being considered by Natural England. We believe that the present proposal is for the path to go inland to avoid the path above the sea wall which was being disputed at the time. Now the pubic status of the route has been confirmed we are looking to it being revised so walkers can use the path above the sea wall in front of Browns Houses. A report on the proposed route should be released in Autumn 2019. Eight weeks will be allowed for comment by organisations and individuals. Owners of land affected by the proposals will be able to object, The matter will be resolved by the Secretary of State. The Society will be making a representation that the route is amended to use this path.