This OS Explorer extract of the Ilkley area shows a short length of Public Footpath leaving Kings Road and abruptly ending between residential properties. So what happens at the north end of the path? Is there perhaps a non-definitive path carrying on northwards that is too narrow to show at 1:25k scale? I could not find any path leading off Kings Road, nor is one shown on Bradford’s on-line ROW map. 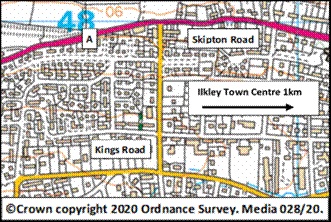 An enquiry to the ROW Unit revealed that the path was originally part of a much longer path (Ilkley 8) that extended to Skipton Road at point A. The entire path was extinguished in 1964, but a short length has survived on modern OS maps – apparently without anyone noticing until now. What makes this doubly strange is that at the time of closure Rights of Way were not routinely shown on 1:25k maps. When the first local Pathfinder was published in 1974 the fragment of Ilkley 8 was shown, so the original mistake must have happened then. I have also found three lengths of Public Footpath (totalling a few hundred metres) on the current Explorer map that were actually closed in the 1980s when the dual carriageway Aire Valley Road was built near Keighley (also in Bradford). The ROW Unit said they would alert OS to all these errors – that was several months ago.

Just prior to submitting this article I checked the on-line Explorer map at https://www.bing.com/maps/ and found that all the paths mentioned above are still shown. However, when I checked the Explorer map on the MAGIC website (https://magic.defra.gov.uk/ ) I found they had been removed. Hopefully the corrections will filter through onto the Bing Maps site in the not too distant future. In a previous Signpost article I reported how I had found various errors affecting Rights of Way in Leeds on the Explorer map. None of those errors have yet been corrected on either of the websites.