Centred around Ladybower Reservoirs, the parish of Hope Woodlands is one of the largest in the Peak District. Covering an area of approximately fifty square kilometres it has upwards of fifty-three kilometres of footpaths. Accessed via the A57 Snake Pass, the Fairholmes Visitor Centre (SK 17228935) provides a convenient base from which to explore the area. For those wishing to learn more about the construction of the reservoirs, Professor Brian Robinson has published two excellent booklets: “Howden and Derwent: The building of the upper dams of the Derwent Valley Water Board” and “Memories of Tin Town: The navvy village of Birchinlee and its people.”

The term ‘woodlands’ is a slight misnomer. A very small proportion of the area is now covered with tree plantations, the parish name hinting at its long ago flora. The vast swathes of moorland are grazed by sheep. 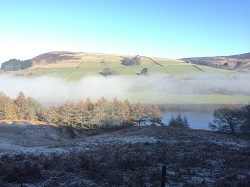 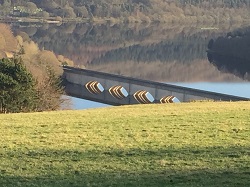 Clear view now that the mist has gone

The eastern boundary of the parish runs roughly up the middle of Ladybower and Derwent reservoirs before heading west to gather in parts of the Kinder and Bleaklow massifs. The valley of the River Alport journeys south eastwards from its source high up at Alport Head on Bleaklow. It eventually joins the River Ashop at Alport Bridge (SK 14228957).

This region is remote and covered with the mosaic of land-use familiar to driven grouse moors. Shooting butts pepper the area. One of the most spectacular landscape features of the Peak District is to be found in this parish. Alport Castles (SK 14269147) is a magnificent rocky fortress. At over 700 metres, it is believed to be the longest landslip in the UK. Towers of gritstone are strewn along the eastern flank of the Alport Valley. The most impressive, named ‘The Tower’, is said to resemble a Motte and Bailey Castle if viewed from certain angles. This is the haunt of Ravens, (Corvus corax) and Peregrine Falcons, (Falco peregrinus). The latter have struggled to survive partly due to persecution and the illegal activities of egg collectors. Protected now, the number of breeding pairs in the UK is estimated to be only about 1,500. Volunteers from the RSPB carefully monitor and guard this particular spot. Peregrine falcons are known to be faithful to nesting sites over many years. 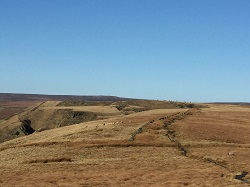 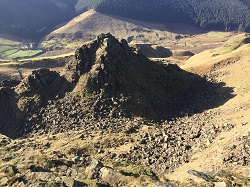 It was a crisp February morning when we set out on our walk. A bridleway starts just beyond the War Memorial on the road into Fairholmes. It commemorates those from neighbouring parishes who lost their lives in the Great War. Frost glistened on the path up through Ridges Coppice (SK 18058848). Looking back, the reservoir was bathed in mist, whilst the opposite hillside basked in early morning sunshine. The original intention had been to go up through the woods, join the path heading due south east over Bridge-end Pasture and down over Crook Hill. However, having climbed up through the heavily shaded and chilly woods we were greeted by glorious sunshine and decided to walk out to Alport Castles before heading back. 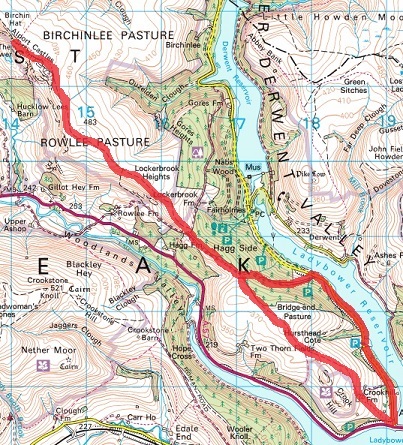 Following the track upwards we emerged onto the evocatively named ‘Open Hagg’. Heading north west, with woodland now on our right, there is an expanse of open countryside ahead. This delightful path squeezes down through Woodcock Coppice then leads out to the Castles. Splendid panoramic views of the surrounding moors, north to Ronksley Moor, west to the High Peak, south towards Hope and east to Howden moor reinforces the sense of isolation. We sat awhile over looking the towers soaking up the views and the sunshine. A little further along at Birchin Hat you will find PNFS signpost 516, surely the Society’s most lowly one! North-east from here is Ditch Clough taking you back down through Ditch Clough Plantation to Howden reservoir. Retracing our steps to Open Hagg we then followed the path over Bridge-end Pasture. Here we were rewarded with excellent views of the iconic Ladybower Bridge as we headed down through Crookhill Farm. This parish provides a wide variety of walking opportunities with stunning views wherever you choose to wander. 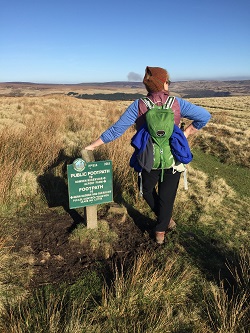 Is S516 our lowest signpost? 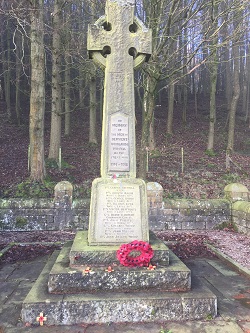 This article is part of a series of Parish Notes which will be published both on the website and in future editions of the magazine. Readers who would like to contribute are encouraged to contact Mel Bale at webmaster@pnfs.org.uk.