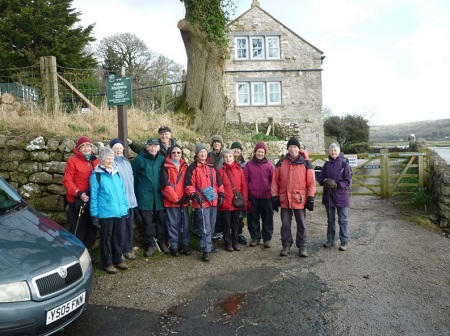 On 25 February 2020 a group of ramblers turned up as I was fixing the plate for S605 at the top of a very high signpost provided by Lancashire County Council. Members will have read in previous issues of Signpost about the twenty-year campaign by Terry Norris and PNFS to have the path through Brown's Houses recognised as a public right of way. Our new signpost marks the footpath going through Brown's Houses so walkers can no longer be forced to walk on the foreshore.

It was a good job that I took some stepladders with me, but I wish that I had taken longer ones. At least it will be hard for anyone to tamper with the plate, as it is out of reach.  I told the rambling group that Fred Ogden, to whom this signpost is dedicated, was my illustrious predecessor. Among the group were the Carr twins Brenda and Margaret, who are members of Eccles Rambling and Social Club and sponsors of S418 and S419 at Langden Brook in Bowland.  The group also included Mr and Mrs John Grimsey.  They were all staying at Parkside Guesthouse at Arnside.  Passing walkers were delighted to be told that they have an absolute right to walk safely on through the gate regardless of the "PRIVATE" signs on it, rather than risk a broken leg, wrist or twisted ankle on the broken concrete of the foreshore route.

The weather forecast was terrible with strong westerlies all day, hail showers and thunder and lighting at lunchtime. None of them materialised, although the fields on both sides of the road from Carnforth to Leighton Moss RSPB were flooded, with big puddles covering half the road in places.  A passing rambler, who was an ex-farmer from near Tan Hill Inn, told me that the whole area had been pumped dry and sown with crops during the Second World War, using the nearby Paint Mine pump.  The pump-house has a prominent stone chimney and the Paint Mine was a source of red lead, etc used for marking sheep. It turned into a very pleasant day in spite of the 150 mile round trip.  S605 has pipped our signs at Lowgill near High Bentham to become our most northerly signpost.  If yesterday is anything to go by, it will be seen by a lot of walkers.

A fortnight later I received an email from a resident who is also a parish councillor in Silverdale: "I would like to thank very much your organisation for this new sign, erected following the long period of dispute at this location, resolved finally at enquiry last year. Positive comments from grateful residents are now being heard about how much more accessible and enjoyable the route along the foreshore has become.  I'm sure many of the visitors to our popular AONB will also be appreciative. I will personally monitor the situation at this location (mile and a half from my home) and advise of any issues that arise concerning either use of the right of way or the sign. A personal donation to the society in appreciation of your actions here will follow this email. Thanks again, JB."

Next: Reg Boot - An Appreciation