These footpaths on Park Farm, in the south of Derbyshire, cross attractive countryside near to the small town of Melbourne. If they were unobstructed, the paths would be very popular with local people and visitors. However, at the junction of the three paths, there is an overgrown cattle grid and a locked field gate across it which are illegal structures blocking the legal lines of both FP13 (which is located at approximately point A in the photo) and FP22. Walkers are encouraged to use the field gate in the foreground, but this is not on the legal line of FP22, and in any case is very difficult to open. 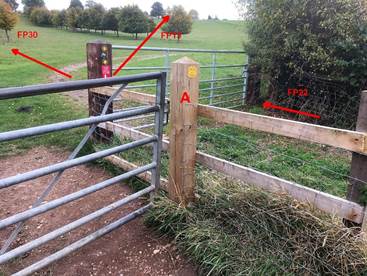 After two years of fruitless discussion with Derbyshire County Council, in January this year on behalf of PNFS, I served s130(A) Highways Act 1980 Notices on the council to try to secure the removal of the cattle grid and locked gate. The council as required served Notices on the tenants, but I managed to convince the council that it was a requirement of the legislation that they also served Notice on the Estate which owns the land. The response has been that I was informed at the beginning of March that an application for a diversion order had been received by the council – encouraging, but of course whether or not this will be a satisfactory outcome depends on the nature of the diversion proposals. Unfortunately all work by the council with respect to this matter has now been stopped, but hopefully when normal circumstances resume, I and the Melbourne local PNFS Inspector, Barry Thomas, who has carried out most of the necessary work in connection with this issue, will be able to assess the proposals. If they do not achieve an acceptable solution, the s130(A) Notices will be pursued to the magistrates’ court, or new Notices served if the time limit has expired.

Next: The Brocken Spectre