What is the Brocken Spectre? A long-forgotten Gothic novel? No. An obscure Hammer horror film? No. A rare meteorological phenomena? Yes. The spectre appears when an observer looks down from height into fog with the sun behind him or her, resulting in the observer’s shadow being cast onto the fog. It can also sometimes be observed from an aeroplane. You can find an explanation at https://en.wikipedia.org/wiki/Brocken_spectre. It is named after the Brocken peak in Germany.

I was once lucky enough to observe my own Brocken Spectre near Holme Moss in Kirklees. I was walking east along Issue Edge (approximately SE087053) in fairly thick fog. A light wind developed which cleared the fog from the plateau, but left the fog on the lower land below undisturbed. I noticed a rainbow-like halo surrounding a figure on the fog bank to my left that seemed to be moving along with me. Waving my arms aloft confirmed that what I could see below was my own shadow. Within a few moments it had disappeared as conditions changed. 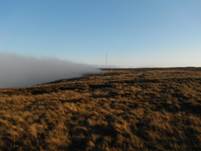 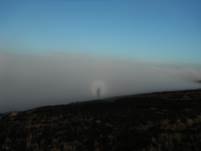 At the time I could not put a name to this phenomena. I mentioned it to a few people but they knew nothing. I just filed away the few hastily grabbed photos I had taken and forgot about it. Just recently I was reading Mountains of the Mind by Robert Macfarlane in which he mentions seeing his own Brocken Spectre and I realised what I had seen. Sadly the image I give here cannot do justice to what I saw that day. Has anyone else seen their own Brocken Spectre?