In this new series we will be focusing on some of the 125 hard working volunteers who are Footpath Inspectors. These are the unsung heroes of PNFS's work who deserve to be better known and appreciated, and in these articles we will have the chance to meet a few of them. 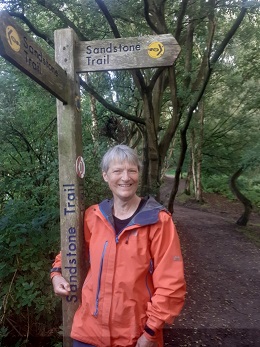 Linda Smith is one of a new generation of footpath inspectors monitoring paths in areas where previously PNFS was under- represented, such as Cheshire West and Chester. She was appointed last November to inspect paths in three parishes in the beautiful Cheshire countryside, Kingsley (near Frodsham), Delamere (a very popular walking area) and Utkinton, a small rural parish. In nine months, Linda has done extremely well, despite a very wet winter, to inspect almost all of the 76 rights of way in these parishes and is ready to take on another.

Linda had always been a keen walker all over this country and abroad. As she says, ‘Walking is a hobby that satisfies my keen interest in the natural environment, keeps me fit, provides mental relaxation and has brought me many friends (and a husband!).’ She is a confident map reader and happy to walk in a group or on her own. Like a lot of inspectors, it was one of our signposts that bought PNFS to her attention. In her case it was a new signpost (No 596) which was installed on the Sandstone Trail at Abraham's Leap, Dunsdale Hollow, near Frodsham in Cheshire. She did some research on our website and ‘was impressed with the breadth of PNFS activities.’

The role of the Footpath Inspector appealed to her, as she explains: "The UK has an amazing network of public footpaths, from which I have gained enormous benefit over the years. Although I have been frustrated by footpath faults in the past, I’ve never really given much thought to how these could be rectified. When I retired last year (I was an Environmental Manager with a large construction company) I was keen to take on voluntary work in an environmental context and the work of PNFS appeared to be a good fit."

Linda found that her three parishes had 18 faults that needed to be reported to Cheshire West and Chester Council: 10 were problems with ‘footpath furniture’, 6 were paths that were obstructed, 1 as a path in poor condition and 1 needed waymarking. All her reports can be found on the Footpath Inspections Database. Fortunately, she has found that the Public Rights of Way Officer in Chester has been very receptive to the issues raised. So far five have been resolved and the PROW Officer keeps her updated with the plan for dealing with the remaining items, which are either non-urgent or need complex management. She says, “It gives me a great sense of achievement when I see a new stile that appeared as a direct result of my PNFS work!” When necessary she is not afraid to do some 'serious gardening’ to cut back overgrowing vegetation

Linda attended a PNFS training session which has given her confidence to recognise and report faults, while she has also appreciated support from Jenny Allen, Area Officer for Cheshire West. An informal get-together for a few local Cheshire inspectors which Jenny organised was, as Linda says, ‘a good way to share experiences and get advice’. Linda also helped at a Volunteers Fair at Manchester University where we would have recruited some student Path Checkers, if the Covid-19 lockdown had not closed everything down. She is convinced that there is more PNFS can do to recruit student volunteers in the future through the student societies in the fifteen universities (and many colleges) in the PNFS region.

Linda has demonstrated that with a background in walking, plenty of enthusiasm and commitment, footpath inspection can be a rewarding hobby - and one that gets results which benefit all walkers.

If you would like to become a Footpath Inspector for PNFS contact me at inspection@pnfs.org.uk or ring 07841647275.