The Holme Valley lies on the edge of the Peak District National park in Kirklees, West Yorkshire. A network of some 229 public rights of way, many “white roads” and a good chunk of access land on the moors mean there are plenty of opportunities for some varied walking. The valley runs roughly South to North. The River Holme’s tributaries pour off the peaty moors of Wessenden Head Moor and Holme Moss towards a network of steep stone walled fields, villages and the small market town of Holmfirth. 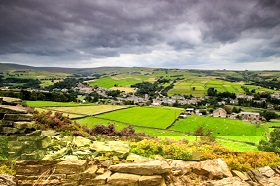 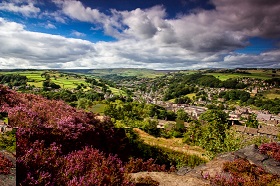 Most of the modern day parish is part of the historic Graveship of Holme which dates back over a thousand years. The Constable of the Graveship of Holme is a job dating back to these times and still in existence today. These days the constable oversees commoners’ rights at the last active community peat digging grounds at the head of the valley. It’s hard to escape the sense of history when walking many of Holmfirth’s paths and why would you want to? To walk in the footsteps of mill workers along cobbled paths, climb stone stiles built 200 years ago or wander lonely occupation roads gives a glimpse into past lives to inspire and set the imagination running.

One of the places to walk if visiting the area is Ramsden Clough, a spectacular steep sided moorland valley largely hidden from view. Locally it is known as “Monkey Nick” because of an old story of an escaped circus ape living up there in the 1850’s. It was reported in the local paper in May 1852 that the ape was captured by a Mr Charles Crossley of Ramsden with the help of his dog! This is a great place to hear Cuckoos in spring and see Curlew and Golden Plover too. Walking the rights of way network in the valley unlocks a world of intimate landscape scenes which evolve with passing light and seasons. As a photographer I’ve found the simple act of walking to be the most important and inspiring photography tool. Regularly revisiting the same paths and walks has led to a deeper appreciation of their value and place in the wider landscape.

A real flavour of the Holme Valley can be tasted by walking a circuit of the River Ribble, a tributary of the Holme. Starting and finishing in Holmfirth the “Ribble Ramble” takes in a high loop of Cartworth Moor, Scholes Moor and Cliff, an extensive viewpoint above Holmfirth. The walk could be described as “Peak Yorkshire” and fittingly the River Ribble passes behind “The Nook” in Holmfirth where at the end of the ramble a pint or two of locally brewed Nook Ale can be enjoyed.

Although many paths in the valley have suffered some degree of neglect since 2010 and austerity the work of Peak & Northern in the area is having an impact with many new path signs, obstructions removed and improvement works undertaken recently. One walk benefiting from our work is the Hepworth Bluebell Walk. Here four timber bridges previously funded by Peak & Northern are due to be replaced at public expense. This is a beautiful walk at any time of year but particularly so in May when drifts of bluebells carpet the woodland.

Holmfirth now has an active Walkers are Welcome group and we run a monthly Sunday walk from Holmfirth library and a walking festival in late summer. The library on Woodhead Road in Holmfirth even has a dedicated walker’s room full of maps and detailed information on local walks. It is well worth visiting! We’d like to encourage more walkers to the area and help improve the path network. I’ve included links to walks mentioned and several others in the area. For anyone not on Viewranger I’d be happy to email route descriptions.

Next: Blocked Path in Sheffield