Since my August report in Signpost 65 we have gained and lost several more signposts. The total is 537. 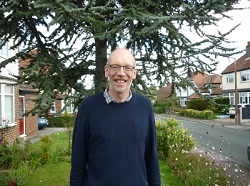 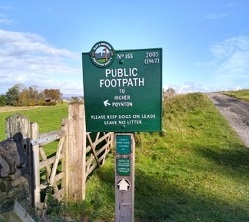 In late September at the end of a day’s signpost maintenance I 'cleaned and jerked' S369 (formerly S5), with its cast iron plate onto my roof bars at High Hills Cottage above Peep o’Day. I took it to SPC for powder-coating and shot-blasting, which is now done. Ross Myddelton of Urmston has joined the Signpost Team, raising the number to ten. All its new members have been issued with a kit to enable them to repaint signs in situ and Richard Honeywell has done a lovely job of repainting S155 (see above photographs) near Keeper’s Cottage, Pott Shrigley.

Ted Wolfe has continued to help John Hodgson with erecting signposts and so have Jeremy Jones of Hyde, Steve Brown of Disley and Andy McMullan of Ramsbottom. Andy also helped me to recover S319 (see photograph of him at sign), which had fallen over on Holcombe Moor, a long way uphill from my car.

S417, which was stolen from Taxal Moor Road probably by off-roaders, has been renewed.

S142 and S222 have been refurbished and reinstated at Macclesfield Forest and Peak Forest by John and Steve. 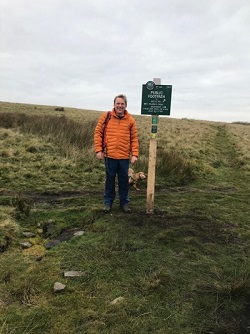 In early October, S371 at Claire House Children’s Hospice, Clatterbridge on the Wirral, was reported stolen via the website. It commemorated a very young boy called Thomas.

On 11 October, I retrieved S001’s plate at Carr Meadow, with the help of a passing off-road cyclist. It was heavy and the nuts took some shifting, having been undisturbed since 1963. I fixed a small plaque to the bare, angle-iron post, saying that the plate had been removed by PNFS for maintenance.

on 17 October, S286 and S319, repainted and on new posts, were reinstated on Turton Heights, Darwen and Holcombe Moor, Ramsbottom by John and Andy McMullan.

Acting on a suggestion from Shirley, our editor, I have contacted the Duchy of Lancaster’s surveyor in hope of getting her consent for a new sign at Whitewell. I have heard from her and am now waiting with fingers crossed for the response of the tenant farmer. A memorial signpost for our former chairman, David Hurrell is being planned with his son Andrew.

Three new plates have been ordered from Leander for:

S316, stolen from its post at Chew reservoir, Greenfield

S258 at Jumbles, Bolton, which the United Utilities controller found, but then somehow lost.

After numerous phonecalls and with help from Robin Tutchings of Wirral PROW, S371 at Claire House Children's Hospice, near Bebbington on the Wirral has turned up and has been re-instated on Wirral FP4. It was reported missing by a member at the end of September.  Now it needs repainting, together with the nearby S370.

For more details of each signpost's location, go to http://peakandnorthern.org.uk/signposts/where-they-are.htm

Next: Signposts available for commemoration