Successive generations of Marsden people have enjoyed the path around the reservoir which served Cellars Clough Mill. Villagers have regarded this as a public footpath. This has also been accepted by the mill management. Industrial use of the mill ceased in 1999. A firm of developers acquired the site and obtained planning permission for housing. In 2009 the reservoir was leased to a fishing club who stocked the lake with carp. They then put up notices claiming the land was private property and that there was no public access allowed. Dog walkers were turned away and people walking along the path were made to feel very uncomfortable. Access was then denied totally by the erection of a locked gate and barriers across the path. 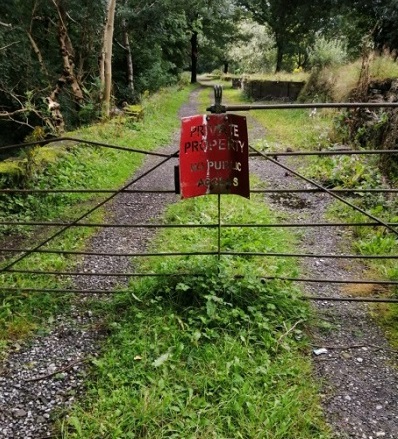 Complaints to the Council requesting that the path be reopened were of no avail as the route was not recorded on the Kirklees Definitive map showing public rights of way. The Society was then asked to help. This involved producing sufficient evidence to show on a balance of probabilities that the path had been used as a public right of way for at least twenty years. The matter has now been resolved and a Definitive Map Modification Order has added the path, Colne Valley 256, to the Map. Why has this taken 12 years to sort out? The main reason is the lack of staff in the Council devoted to processing these cases and the huge backlog of claims. The first stage of making the claim is within the control of the applicant and is normally completed in a few weeks.

This involves obtaining a large scale map acceptable to the Council on which the claimed route can be drawn by witnesses. The Council will provide a user evidence form containing a series of questions concerning how long the person has used the path, whether the path has ever been obstructed, was there ever a stile or gate on the path or notices seen denying access to the public. Finally the person is asked whether they would be willing to attend a hearing or public inquiry if the need arose. In our case 34 people filled in a form showing public use of the path back to the 1940s. It was then necessary to notify the owners and occupiers of land crossed by the path that the application had been made. A form was then sent to the Council describing the route, and listing the owners and occupiers notified of the application. This was accompanied by the 34 user evidence forms. In an ideal world this material would be examined by a Definitive Map Officer in conjunction with evidence about the area held by the Council; a report would then be drafted with a recommendation to the Council that a DMMO be made. In the real world the application to record our path joined a queue of 121 other applications; the oldest of these had been submitted 23, 24, 25 and 27 years ago. Our application was ranked 27th. As only a handful of cases are considered each year, a long wait was in store. However someone who has applied for a DMMO which has not been decided after 12 months may apply to the Secretary of State for a direction, ie the Council is told to make a decision within a specified time. Our application was successful and a planning inspector directed that the Council should determine the application by 31 December 2017. 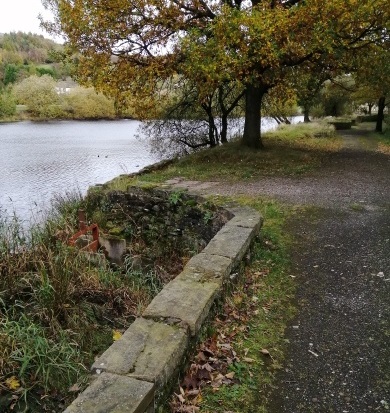 After a considerable amount of badgering of the appropriate Council officers a report was produced for the Planning Sub Committee meeting in February 2018. This contained a detailed analysis of the evidence and recommended that a DMMO be made as applied for by the Society. The landowner denied the existence of a public right of way and opposed the order; as did the fishing club stating that gates across the path had been locked, notices displayed denying public access and that, the land was private. They also asserted that dogs accompanying walkers would adversely affect the fishing. A local councillor spoke strongly in favour of granting the order; she had known and used the path since childhood. The solicitor for the landowner asked for more time to submit evidence. I spoke (subject to a two minute limit) arguing the solicitors had plenty of time to submit evidence against the order and that the people of Marsden had waited long enough to get there path back. The committee voted unanimously in favour of making the DMMO.

A DMMO cannot be confirmed by the Council if any person opposes it even if the grounds are spurious. The order must then be referred to the Planning Inspectorate, who will arrange a hearing or public inquiry to decide if the order should be confirmed. The date for the event is determined by the Planning Inspectorate and the Council. A time table is then set for submission of a statement of case and written statements of witnesses (proofs of evidence) which set out what they will say. The landowner decided not to oppose the DMMO but some members of the fishing club maintained their opposition although they failed to submit any documents. It might be useful to the reader to set out why the arguments of the fisherman were of no validity. Firstly the erection of gates, barriers and notices took place after the route had been established and a public right of way because of use over a period in excess of 20 years. The claim that dog walkers would disturb the fishing is an irrelevant argument based on suitability; similarly we cannot use the argument that the path would benefit the public using the path. Finally the claim was made that the land was private. Almost all public footpaths and bridleways are on private land; this does not prevent there being public rights over the land. Covid restrictions then intervened and the inquiry was cancelled. The inspector suggested that the matter was resolved by exchange of written statements. I submitted a selection of statements from our witnesses. The inspector made an incognito visit and then considered all the documents submitted by all parties. She then confirmed the DMMO was applied for some 12 years ago.

There are many paths like that around Cellars Clough reservoir which are used by the public and greatly valued but not recorded on the Definitive Map. At any moment the landowner can deny the public entry and neither the Council nor the Society can take steps to have the path reopened until its public status is proved. This process is not affected by the cut off date for ‘lost ways’ which are based on historic evidence. If you know of such a case and would like to take matters further to clarify the legal position of the path, please contact the Society at lost-ways@pnfs.org.uk. Working on these cases is interesting, worthwhile and sometimes very satisfying.

Next: Book Review: The Book of Trespass