Book Review: The Book of Trespass, By Nick Hayes, Published by Bloomsbury Circus 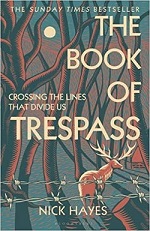 Nick Hayes is an author, illustrator, print maker and political cartoonist. Reading this book felt like being on a roller coaster ride through the history of access to and land ownership in England. He has trespassed into estates that have been fenced off from the general public by individual families for generations to reveal to us just how much of the country is out of our reach. It is a political book that some may not agree with, but you can’t deny the breadth of Hayes’ research and passion for what he sees as the ‘meagre remnants of the countryside’ that ordinary people are allowed access to.

The National Parks and Countryside Act 1949 outlined procedures that would legitimise ‘rights of way’ in all the counties of England. They would be marked on ‘Definitive Maps’ and from the 1970s have also shown on OS maps. The author tells us that there are ‘117,800 miles of public footpath in England, half of that of a hundred years ago’ and then warns that, on January 1st 2026…’any path that has not been registered on these ‘Definitive Maps’ will automatically be extinguished. His message is clear, unrecorded paths are now at risk. For PNFS, this is a call to arms. The society’s “Lost Ways Initiative” seeks to uncover old routes that should be recognised as Public Rights of Way. Once identified, they are then reported to the relevant Highways Authorities for registration ahead of the 2026 deadline. As a contrast he draws our attention to the Scottish Land Reform Act 2003 which opened up vast tracts of Scotland to ‘non-motorised activities, including walking, cycling, horse-riding and wild camping’. He argues that the Countryside and Rights of Way Act 2000 should be similarly extended.

Hayes’ acts of trespass take the reader into many areas where public access is forbidden. He provides historical background to the estates and a host of interesting information about how the land has been used down the centuries and has been written about. He writes movingly of our need to have access to our ‘own wild and spiritual mind.’ Each chapter heading is illustrated with the animal of its title and there are very atmospheric double page illustrations throughout the book of places he has walked through or spent the night in.

This book may not be to everyone’s taste, but it is an honest and passionate account of how land has been parcelled up and then enclosed behind walls and fences. It tells of the way people have been forced off the land and of attempts by some to reclaim their ancestor’s birth rights. I found it an energetic, informative and inspiring book. I thoroughly recommend it.

Next: Repair of Stepping Stones Across the River Hamps, Linking FP3 Onecote with FP42 Grindon, Staffordshire