This is an on-going saga. The river is currently, and was historically, crossed by means of stepping stones, as in the photograph, which was taken after a dry spell of weather in May this year. The stones were then only suitable for use by agile walkers in good boots, and in winter are impassable. 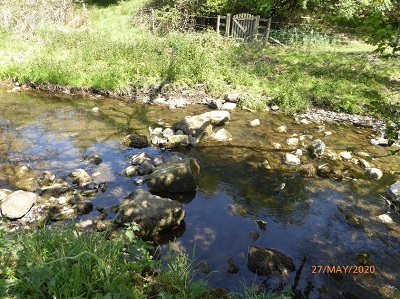 Since March 2016, and probably before then, the Society has been trying to work with Staffordshire County Council to restore this river crossing so that it is safe and convenient for public use at all times of the year. In late 2017, the Society’s Trustees offered an “in principle” donation to the council for the construction of a footbridge, but this was declined, mainly because of lack of council staff resources. The Society then decided that it would offer funds for the repair of the stepping stones. Discussions with the council continued, but in August 2019 it was realised that only the eastern half of the line of stones was recorded as a public footpath on the definitive map - the recorded route of footpath 42 Grindon ended at the parish boundary in the middle of the river, and the continuation in Onecote, which should have been recorded as part of FP 3 Onecote, was missing from the map. This meant that the council did not have a duty to repair the stones in Onecote, and the usual practice of serving a s56 Highways Act 1980 Notice on the council to try to make it carry out repairs would fail.

It has therefore been necessary to collect and assess historic evidence that the missing link is a public footpath which should be shown on the definitive map. I have been doing this for the past year, hindered by the lack of access to archives where the relevant historic documents are stored. However, on 22 October I was finally able to submit a formal application to the council, on behalf of the Society, for the council to make a modification order to add the link to the definitive map as a public right of way. The major drawback to this course of action is that the council has a backlog of several hundred of such applications, and the Society’s application may not be determined for many years.

It is possible to appeal to the Secretary of State after 12 months from the date of the application, seeking a direction from the Planning Inspectorate to the council to determine the application, but since the council has already over 80 such directions with which they have not complied, any appeal is unlikely to have much effect. Still, in October 2021 we will make an appeal, and meanwhile, since the evidence that all the line of stepping stones is a public footpath is very good, we continue to try to persuade the council to accept the Society’s donation and repair the stones, or, even better, construct a footbridge.

Next: Those Feet, That Path