The village of Eyam in the parish of the same name has an unenviable claim to fame. It is perhaps better known as the plague village. In this year of the Covid-19 pandemic, the events that led to the use of this epithet are worth recounting. Samuel Pepys recorded that Black Death returned to London in June 1665. On 7 September of the same year, George Vickers, a tailor's assistant died of the disease in Eyam after he unpacked roll of cloth that had arrived from the capital. Five more people had died by the end of the month. Fearing for their lives some villagers left, others sent their children away. The local vicar, William Mompesson and his predecessor Thomas Stanley realised that people were passing the plague to one another and that if they left the village even more people would probably die. Over 350 years before the term 'self-isolate' became common usage throughout the world, Mompesson and Stanley convinced the population of Eyam to do just that. The village stayed in quarantine for 14 months, out of a population of 700, 257 died. They included Catherine, Mompesson’s own wife. Elizabeth Hancock, lost her husband and six children. They are buried in graves that she dug in Riley’s Field, now a National Trust site called Riley’s Graves. The village paid a terrible price, but the sacrifice wasn't in vain. The plague was contained and didn't spread to neighbouring areas. 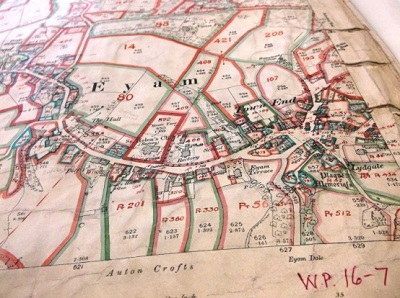 Ironically this sad history means that Eyam and the surrounding parish has made it one of the most popular in the Peak District. Ed Douglas has described the area as 'a place of geomantic charm and mystery, hidden corners and unexpected angles'. It is situated on the ill-defined boundary between the limestone country of the White Peak and gritstone moorland of the Dark Peak. Some would say that it contains the best of both. It certainly offers some of the finest and most interesting walking in Derbyshire.

The parish is home to two PNFS signposts, 78 (SK22456 78029) and 457 (SK21296 78866). When it is safe to get out and about I’d recommend that you plan a route between them and then explore the 20 km of PROWs which criss-cross the parish. You won’t be disappointed, there are great views, ancient remains, old field systems and much more. Feel free to email me your routes and photographs and I’ll post the best of them on the website. 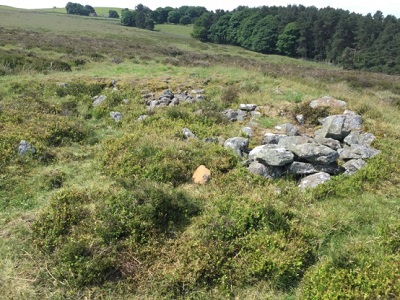 Eyam's history is never far away though. It is almost as if it has seeped into the landscape. Until this year it was possible just to see Eyam as a pretty village with a sad history. We have now lived in the shadow of the pandemic for too many months and understand how vulnerable we still are despite all our luxuries and technology. The self-sacrifice of the people of Eyam shows us the better side of human nature. In the words of the poet, Robert Frost, 'the only way out is through’, let’s hope that we are getting there.