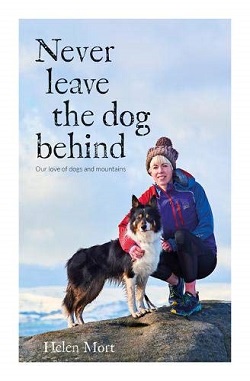 Helen Mort is a poet and a novelist. She is also a climber and runner. Her latest book is a fine example of the skills that are needed to excel in all these challenging areas. It celebrates the companionship that many people get from behind out in our wonderful landscapes with what has come to be known as man’s (and woman’s) best friend.

The book is a personal memoire and an exploration of other people’s experiences with their dogs whilst out walking, running and even climbing.

The author tells of how as a child she had several violent encounters with dogs and subsequently came to fear them. It was only when she moved to live alone in the Lake District that she overcame those fears when she took in a whippet she named as Bell. The dog became her constant companion around the local towns and villages and when she was out running on the fells as well. I was surprised and moved by how openly and honestly she writes about her thoughts and experiences.

Helen is a well-regarded poet and her skilled use of language pervades the book. Her love of other poets also features strongly. Norman Macaig, John Burnside and Anthony Hecht amongst others are quoted, they all share her love of landscape in its many manifestations.

The book provides the author the opportunity to a meet a range of people and to talk to them about their relationship with their dogs. Chris Bonnington appears early in the book and tells her the story about finding that his own dog, Bodie, had somehow managed to follow him and his son up Gillercombe Buttress on Green Gable. The two men had to carry out a precarious act of mountain rescue to get Bodie back to safety.

The tables are turned in a subsequent chapter when Helen meets up with Paul Besley, another writer, who is also a member of his local Mountain Rescue team. For the last few years, Paul has been training his dog Scout to be a rescue dog, one that is skilled in finding ‘bodies’ who need to be saved in the wilds of the hills. He talks passionately about his relationship with Scout. Helen describes them as ‘Two craftsmen, each reading the other and responding… I wonder what is must be like to be Scout, free and tethered out on the moor, brought back by invisible thread.’ It is fitting that the dog that appears on the cover is in fact Scout.

This short book is filled with interesting characters, both human and canine and like all the best books leads the reader off into unexpected and interesting directions. There is a very helpful set of Notes and Bibliography at the end of the book.

Whether you have a dog as a companion or not, I’m sure that most of our readers will enjoy this book.