I said in an earlier article that research for a Definitive Map Modification Order (DMMO) application is like a jig-saw puzzle. I would now add that the puzzle is sometimes back in the box when that elusive missing piece is found. Calke is a well known and popular National Trust property and Estate in South Derbyshire. Like most NT sites it has imposed limits on visitors but the park is crossed by public footpaths which should remain open. An issue that the local inspector has had to address, complicated by dead end paths created by the construction of Staunton Harold Reservoir. Photograph shows unrecorded route from Smisby FP14 with stile and waymark, not lost just not recorded. 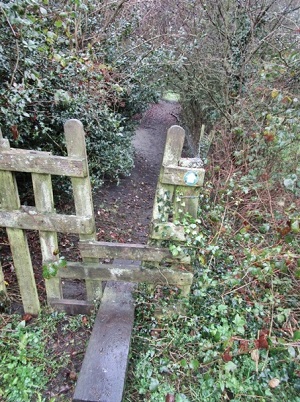 A fellow PNFS member who lives in the area invited me to join him for a walk and I found the undulating fields on the edge of the Trent valley a pleasant alternative to the limestone of the dales. So much so that we have taken a number of walks attempting to cover different paths on each excursion. Inevitably I studied the map and found two dead end paths at Smisby on the Leicestershire border close to Ashby de la Zouch. Smisby footpath 24 has a gap of just 110 metres from other paths at Wicket Nook. Old maps soon explained the cause. The path had been in Leicestershire and the gap was in Derbyshire. The boundary has since been moved putting the path and gap in our patch.

Leicestershire Rights of Way team provided a copy of their early definitive map which shows a path O87a stopping at the then county boundary. Not a lot of help. But unlike Derbyshire, they have the Tribunal records and the path number indicated a later addition. On 27 April 1954 an Inquiry was held to consider objections raised by publication of the Draft Definitive Map. Representation by local walking groups alleged that a path running from Heath End, Ashby, south-westwards to Wicket Nook and the county boundary had been omitted. The Tribunal agreed to recommend that this objection be allowed. this only confirmed what is now recorded on the definitive map but the Tribunal was also told that the path “does actually link up with a path that goes by Wicket Nook”. Along with other evidence it was agreed we had a case worth submitting a DMMO application to DCC.

I find it frustrating that we don't have the Tribunal records for Derbyshire although we have discovered maps at the Records Office that show the paths affected by the review of the Draft Map. Sad to say some useful links are recorded on these maps as 'to be omitted' and they were.

Back to that missing piece. I thought I'd take a look at the PNFS material that has been digitised and uploaded. What I found didn't go back to the Tribunals but taking a lucky dip in Smisby I found a 2002 diversion of FP16. Why not take a look if only to remind me where FP16 is. It starts at Wicket Nook and the plan prepared by South Derbyshire District Council marked up connecting paths including our claimed route annotating it 'unnumbered footpath'. Jig-saw complete!