At the end of January 2021 we had 536 signposts. As of 11 May we had 537, so yet again this report is mainly concerned with maintenance and inspection work, but more new signposts will be appearing soon.

Our new signpost is 615 at SE 05362 09050, just below Wessenden dam, Marsden, where the Pennine Way (footpath)parts company with the Oldham Way (bridleway). It stands on Yorkshire Water’s land and was installed for us by Nick Baker of the PDNPA. It’s cost was covered by a donation from the Long Distance Walkers Association’s “Irregulars” Group and it celebrates their 2000th walk in 2021. It will be seen by many local walkers as well as those doing the Pennine Way. 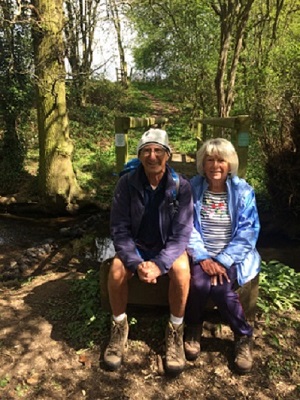 David Bratt and his wife Beth at bridge 14, Mobberley,
which has memorial plaques commemorating his long service to PNFS

S381 (post replaced and plate repainted) was reinstated at Higher Hurdsfield by John and Ted.

S326 and S327 at New Inns Farm, near Alsop en le Dale, were reinstated by John and new member of the Signpost Team, Merrick Iszatt, who handily lives in Bakewell.

I retrieved corroded plates from S116, S169 and S181 on the Bowstones to Sponds Hill ridge, then S157 from near Reeds Bridge, Kettleshulme.

On the 31st at Chew Reservoir, I replaced the plate, stolen in August from S316, with a new one.

I touched-up the green on S517 near Goyt Hall Farm at Bredbury. S518 was still perfect. Shirley repainted the logos on S418 and S419 near Langden Castle, Bowland.

Richard Honeywell finished repainting S147 at Berry Clough, Upper Goyt Valley after 4 visits. It looks as good as new! See page 13 for more on this signpost.

On the 21st, with help from footpath inspector Graham Fullarton of Belmont, I retrieved S282 and S240 from near Egerton. S282 had been snapped off and thrown over a high dry stone wall with new barbed wire fence. S240 near Whewells had a rotting post and very tatty paintwork. It will take a team of three or more to reinstate them. S240 is 1km uphill! S116, S169, S181, S240 have all been shot-blasted and powder-coated by Stockport Powder Coating. 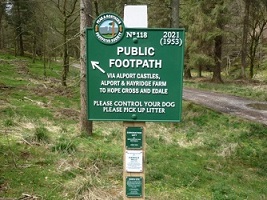 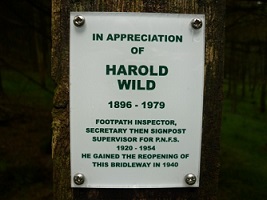 PNFS member Jane Hodgson kindly checked S308, S357 and S358 on Marsden Moor. All had escaped serious damage, but S357, which had been close to the fire, needs the logo repainting, as the blue paint on it had run. There was no sign of damage to its post. It had been saved by the patch of green grass surrounding it, just like S308 and S358 in the fire of April 2019.

On the 5th I collected six new plates from Leander for new signposts at Laund Farm, Chipping, then climbed up Haggside to clean S057, before inspecting/cleaning Harold Wild’s memorial sign S118 at Ditch Clough, Westend Clough, Howden Res’r, then S106 at Alport Bridge on the A57.

On the 10th team member Andy McMullan and I retrieved S284, which had fallen over at Haslingden Grane and needs a new post.

On the 11th I took S615 to Wessenden and helped Nick Baker (PDNP ranger) to erect it.

A list of 37 signs available for your memorial plaques is available from me on request via davidcmorton@ntlworld.com

Many thanks to all those members who have helped me, especially John, Ted, Shirley, Richard, Merrick, Graham, Jane and Andy for their hard labour in the field.

For more details of each signpost's location, go to Where They Are

Next: Inspectors wanted for Staffordshire