Tom Degg is our youngest footpath inspector and a student at Lancaster University. He hails from Chester and, since last summer, has been inspecting several parishes near to the city. The Society is attempting to attract more younger members and volunteers, so it is of particular interest to get Tom’s point of view of our organisation and how we can appeal to his generation. Tom was interviewed for Signpost by David Gosling (DG). 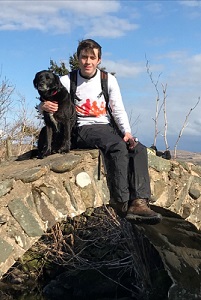 Tom: From a young age I have explored the great outdoors from mountain biking to walking. Having spent a lot of time in Snowdonia with my father and grandfather, I have come to enjoy walking the mountain and forest paths within the National Park. I enjoy camping so much that I decided to take part in the Gold Duke of Edinburgh Award in my final year of school. Recently I have explored the Sandstone Trail during the winter months of last year with family members. I love walking because it is a very relaxing exercise that is accessible to all ages.

DG: How did you find out about PNFS and how can it improve its publicity with students?

Tom: I discovered the PNFS when looking for volunteering jobs within the Chester region last summer. I found the Society on a website that listed a range of volunteering positions and due to its unique nature caught my eye. I had never heard of it before joining despite walking many of the footpaths that it surveys. It is very unlikely that many people would search online through lists of volunteering roles to find the PNFS. I think that not many students are aware of the Society’s existence despite it playing a crucial role in maintaining footpaths they often walk on. We must disregard the notion that this is due to the current generation not caring about footpaths or enjoying walking or spending time in the great outdoors as this is just not true.

Using social media to raise awareness of the PNFS is key to increasing student volunteer numbers. The Society has an Instagram and Facebook account, but I suggest a better way to raise awareness using social media would be to create an open Facebook page and ‘friend’ students. This would be better as Facebook is generally a more formal platform and so asking students if they would like to join would be more appropriate on this app. Responses are more likely and this would ensure the Society is actively engaging with students who might be interested in joining it.

PNFS's poster is effective, but the details of our Instagram account in a prominent position would catch the eye of students more than a telephone number. These posters should be placed around campuses since posters are a popular form of advertisement used by university societies. I would be more than happy to do this on my campus.

DG: Why did you want to become a footpath inspector? Do you think the role could appeal to other students?

Tom: I wanted to become a footpath inspector for various reasons. A central reason was because I would be able to combine an experience that I can put on my CV with a hobby (walking). I also wanted to help support my local community during the start of the Covid pandemic when supporting our communities was never more important. Due to the various skills that you learn as a footpath inspector I feel the role would appeal to students especially if they want to put a good volunteering example on their CV.

DG: What do you enjoy about being a footpath inspector?

Tom: I enjoy the responsibility that comes with being a footpath inspector and the feeling that you are not only supporting your local community but also the countryside. I also like using the various online systems we use to log our inspections.

DG: How could PNFS interact with student groups more effectively?

Tom: Social media is the key to engaging with student groups who would be interested. At my university the largest society is the walking society which has over 600 active members. This shows that the society has the potential to gain large amounts of younger members if it promotes itself in a manner that appeals to them. Students want volunteering roles that require skills that they can put on their CV. The PNFS can offer such roles to such students and it must be made clear when trying to reach them.

If you would like to become a Footpath Inspector for PNFS please contact David at inspection@pnfs.org.uk or ring him on 07841647275.