On 11 May we had 537 signposts in total. We’ve just added S617 and S616, making a total of 539, but this report is mainly concerned with maintenance by Signpost Team members. Photographs show S617 and John Hodgson installing it. 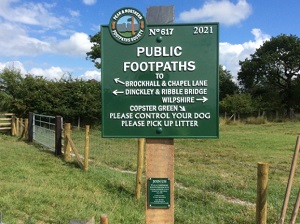 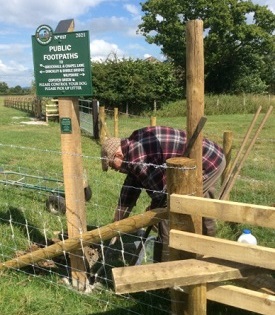 May: S116, S169 and S181 which stand between Bowstones and Sponds Hill, had corroded and become unsightly. They were removed, shot-blasted, powder-coated, repainted and re-instated. S116 has been re-fixed to its angle-iron post, which has been hidden from view by re-using the sound two thirds of the old post which supported S240 at Whewells on Turton Moor. S285 near Upper House, Kinder, was rewedged by Steve Brown. I retrieved the broken plate from S152 at The Peak School, formerly known as the Moorside Hotel. It is a thin and badly corroded plate dating from 1967, which had been broken previously in two pieces and repaired by using a very thin and bendable piece of metal as a backing plate. Finally someone must have stumbled on the stile and put their full weight on the plate which duly bent through ninety degrees. It has now been shot-blasted and powder-coated and re-backed using a redundant , modern-style PNFS signpost plate cut down to size, from our small but growing stock in Taylor House garage. Steve Brown repainted S344 at Gowhole, IMO our former vice-president Sir Martin Doughty.

June-July: John Alexander, a new member of the Signpost Team, repainted S335/a> at Delamere and Steve Brown repainted S317 high above The Grouse at Birch Vale and three-quarters of S247 at Mill Hill. I took delivery of ten tanalized softwood posts, because, due to Brexit, oak posts from France were unobtainable. I reposted S240 and S282, which John Hodgson reinstated at Whewells and Egerton with help from his friend Paul and signpost-team members Andy McMullan of Ramsbottom and Graham Fullarton of Belmont. I began repainting the nine signs between Grindle Clough and the A57 at Moscar Lodge.

Steve Brown repainted S343 (IMO Sir Martin Doughty) on the A6 at Newtown.

Steve Brown repainted S003 and F007near Stony Ford and S098 at Chapel Gate. I had to give him my last part-tin of green paint! He also touched-up S174 and S182. John Alexander of Lymm repainted S370 and S371 at Clare House Children’s Hospice on The Wirral.

Manchester and High Peak Ramblers have financed four new signposts at Chipping and an existing one at Slaidburn, IMO five of their deceased members. Nottingham HF have financed two, S571 and S606, at Ashover, IMO Fred Shepperson.

Four new signs at Laund Farm, Chipping; four at Stretton Hall Farm, Clay Cross; one at Alton, Ashover and one on north bank of River Calder on Burnley and Pendle Ways at Padiham.

For more details of each signpost's location, go to Where They Are