Cheryl Speight is one of our new generation of inspectors who volunteered with PNFS in February this year. Like many other new volunteers, she joined us during the pandemic when many people started to look at their home areas in a new light. Cheryl started by inspecting her home town of Chorley (Lancashire) and then added Charnock Richard, Heath Charnock, and Withnell. 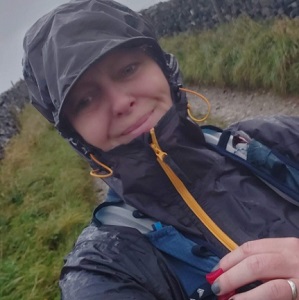 Cheryl has been exploring the trails in her home area since she took up running seven years ago. Ironically she says that “I actually began running on the trails so that I'd be seen by less people when I was out running! So, I've always been a trail runner, if only a runner for a few years”. She mostly runs and walks around Chorley and the West Pennine Moors around Withnell, Rivington and Anglezarke, so she now knows the area well after years of exploring this part of Lancashire. She loves the moorlands and feels strongly that we should all have access to them. “I value the right to roam and I want to protect that right for all.”

Since the lockdown and menopause, along with a recurring injury, she now runs less, but she still enjoys hiking, or a mix of run and hike. She says, “I enjoy being outdoors. I like to get out for my wellbeing and as a relief from the stress of work.”

Through her trail running she began to take an interest in maps. It all started with a watch which had ‘breadcrumbs’ (a way to navigate or find your way back) which gave her the confidence to go further afield exploring. She then began paying more attention to maps, teaching herself basic navigation. Just before lockdown she qualified for the NNAS Bronze Award. National Navigation Award Scheme (NNAS) is a personal performance, non-competitive, incentive scheme for all ages to learn navigation skills and gain confidence to get out and enjoy the countryside (see https://nnas.org.uk/). The NNAS course inspired Cheryl’s love of paper maps which is reflected in the collection of maps she has acquired.

On a run over her local moorland one day, she was attracted to one of the PNFS signposts and took a photo. Shortly afterwards she stumbled across PNFS on twitter and after a bit of investigating into what PNFS does, she joined up! She likes the idea that “there is someone (that’s PNFS!) who is actively trying to keep our footpaths open so that we don't lose them - even if we don't always use some of them. It's our right to roam”.

She decided to become an inspector so that she could do her bit towards preserving footpaths. “The biggest problem around here”, she says, “are locked gates and landowners who are reluctant to give access to walkers. There are many footpaths that get overgrown because they are not maintained. If they are not kept, they become unused.”

Cheryl has found that being a footpath inspector is a novel idea to many runners. “I think that our presence amongst runners is small. Some have said to me they didn't know that footpaths were inspected! I for one didn’t! Although I did know that I could report issues via ramblers.”

The way to raise the profile of PNFS among runners, Cheryl believes, is to put more posts on social media (Facebook, Twitter, Instagram). “We need to highlight what inspectors do and use their profiles and inspections that they post. We also need to interact with more posts with an outdoor profile on social media such as Ramblers, Slow Ways, LDWA, Ordnance Survey etc.”

What are the attractions of being a footpath inspector? “I enjoy exploring the paths I have, and the satisfaction that they're mostly in good shape. I also love the chats with walkers while on my inspections. They seem genuinely interested (and appreciative) that they are inspected. I've had a runner who asked me directly to inspect paths near her, and I have done that. Admittedly, the waiting game after making a report, or raising a concern, can be frustrating, but I am loving finding new paths and I get the satisfaction of knowing I am contributing to preserving our rights of way that are so important to us runners and walkers.”

If you would like to become a Footpath Inspector for PNFS please contact David at inspection@pnfs.org.uk or ring him on 07841647275.