Aireborough lies in the north west of Leeds and offers a range of walking experiences - from a network of easy-going permissive paths around a re-purposed psychiatric hospital (A on map) to areas of exposed but not too difficult moorland (B and C). There is a mix of farmland, woodland, golf courses, and parks, and some interesting paths embedded in the urban fabric. Throw in an area of Victorian mansions (D - many also re-purposed), and a semi-natural tarn now used for water sports right next to a noisy neighbour in the shape of Leeds-Bradford Airport (E), and the result is a very varied walking environment.

Aireborough includes Rawdon, Guiseley, and Yeadon, and surrounding smaller settlements. It takes its name from the River Aire, though this is at the southern edge of the area and rarely glimpsed while out walking. Despite being next to the river the highest point in Leeds (F) also lies in Aireborough at a little over 340m on Hawksworth Moor (B) in the extreme north west. Hawksworth Moor is part of the much larger Rombalds Moor of which the rather more famous Ilkley Moor is also a part. A smaller area of moorland - Guiseley Moor (C) - lies in the north east and abuts the Chevin (G) which is just over the boundary in Otley and which has its own impressive viewpoints. Another easily reached viewpoint is located at Billings Hill in the south east of the area (H). 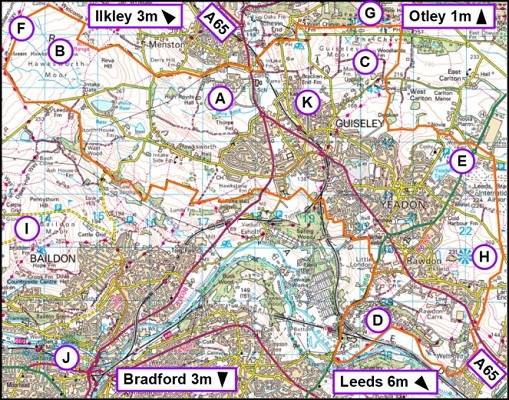 For me a walk in Aireborough usually starts from somewhere on the A65 along which the Leeds-Guiseley-Otley bus service runs. Within minutes of getting off the bus it is possible to have left the main built-up area behind. Not being encumbered by a car means not being restricted to circular walks. Linear walks can easily extend across the Airedale/Wharfedale watershed and finish in Otley (also in Leeds), or in Burley-in-Wharfedale or Ilkley (both in Bradford). It is equally possible to remain within Airedale and take in Baildon Moor and the Saltaire World Heritage Site (I and J - both in Bradford). Bus and rail links throughout West Yorkshire are good so getting back home after a linear walk is not a problem, and multi-operator bus/rail tickets are available.

A major - but under-recognised - feature of the area is the Guiseley Gap. This is a glacial hanging valley linking Airedale and Wharfedale which has long been utilised for transport links between the two dales while avoiding steep gradients. A surprisingly good view across the Gap from a comparatively low-level is possible from the privately-owned Parkinson’s Park (K). The Park was left for the benefit of local people by brothers Frank and Albert Parkinson. After a period of decline the Park now has an active Friends group, and is a great example of local people coming together to support a community resource.

Aireborough may not have the widely-known scenic delights that can be found elsewhere in PNFS territory, but for the range of environments that it encompasses it is hard to surpass. I find it a good place for a winter’s day outing as it is possible to include some fairly high-level walking with good views, but without being exposed to the vagaries of the weather for the whole day.

Here are some on-line resources that tell you more about the area:

All previous Parish Notes can now be viewed on the website at pnfs.org.uk/parishnotes