A History of PNFS Signposts - Part One

This article was first released as an PNFS online talk by David Morton on 20 July 2021. Listen to it HERE on our YouTube channel

The origins of PNFS and its signposts lie in the 19th century. Enclosures of the Pennine moors whereby these few, remaining common lands were grabbed by rich landowners who turned them into profitable, privately-owned grouse moors, which now receive large subsidies from the public purse. Class conflict ensued between the new owners of the grouse moors like the Dukes of Devonshire, Rutland and Norfolk on the one hand, and the growing hordes of ramblers, who, on Saturday afternoons and Sundays were, thanks mainly to early trade unions, escaping the heavily polluted air of our northern industrial cities via the railways to places like Hayfield, Glossop and similar termini on the Sheffield side. The railway companies helped this mass exodus to the moors by inventing cheap day-return and half-day circular train tickets. Tramcars and buses came later.

PNFS was founded on 16 August 1894 led by influential members of the new middle classes, to fight the closure of the Hayfield to Snake Pass pack-horse route by the Duke of Devonshire’s gamekeepers. It was open to all classes and the min annual sub was half a crown – a day’s pay for many. Our aims, etc were reported in the Manchester Guardian and some Sheffield papers. They outlined the long-standing use of the Snake Path by cloth merchants and their packhorses, Rotherham butchers who drove sheep along it to a meeting point with Hayfield butchers and Wesleyans attending Love Feasts. Hannah Mitchell, who became a working class suffragette from Alport Farm, mentions them. She became a Manchester councillor and magistrate and worked for Keir Hardie of the Independent Labour Party. She has a plaque at Alport Farm. 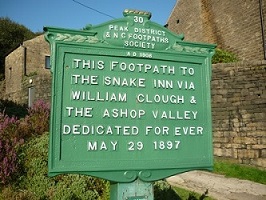 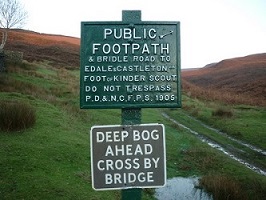 One of our largely forgotten founder members was Richard Pankhurst, a very able, well connected liberal/socialist barrister based in St James’s Square. According to Wikipedia, Richard also campaigned for freedom of speech; free secular education for all; republicanism; Irish home rule; independence for India; the nationalisation of land; the disestablishment of the Church of England and the abolition of the House of Lords. He went to Manchester Grammar School and won a gold medal as the best law student of his year at Manchester’s Owens College. He went on to marry Emmeline Goulden of Moss Side in 1878. He, with the help of Mrs Pankhurst, drafted and pushed through the Married Women’s Property Act of 1882, then helped found the Independent abour Party in 1895, with support from the Clarion weekly socialist newspaper and Keir Hardie as its first chair. I believe that he met the Duke of Devonshire or his lawyers on 11 May 1895, secured his and the shooting tenants’ agreement on 30 September 1895 and in May 1897 the path, Hayfield BW64, was dedicated for ever (see S30 photograph). (Sadly he died in 898 of ulcers aged 64 and is buried in Brooklands Cemetery, Sale.)

There was to be no trespassing or damage to property. As part of our agreement with Devonshire, we marked the Hayfield-Snake Path with direction posts or notices and small mileposts which I suppose were initially made of wood. In due course these rotted. In 1905 as PNFS grew and prospered the first (see S1 photograph) of our cast-iron signs appeared at Carr Meadow on Hayfield BW47 and near the white shooting cabin on Middle Moor, where BW47 joins BW64. In the next few years around 20 more sprang up around Hayfield, the Snake, Tunstead Milton, Hathersage, Grindleford, Hope and the Edale Valley. They were painted white with black lettering. 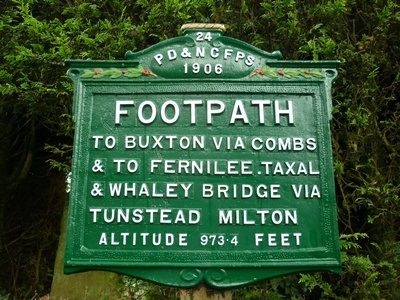 They were the work of another founder member, Thomas Mower of New Mills, our first Footpath Inspector, who with his son Rowland, cast about 50 plates between 1905 and WW1. Thomas, after an apprenticeship at the mill at Phoside Farm, eventually gained a senior post at Hayfield Union Workhouse at Ollersett. Rowland was an engineer in his early 20s and had an artistic streak and access to a foundry. He carefully produced about twenty plates, which in appearance and quality (see photograph of S24) have never been equalled. I think that the most elaborate of these were notices 41 (see photograph of sketch) and 42 which for 20 years from 1912-1932 marked the ends of the Doctors Gate bridleway, from the Snake Pass to Old Glossop, telling walkers that the track was still closed to them during April, May and most of August. Both were removed and lost in 1932, the year when Lord Howard finally yielded. The path became open all year round, so ordinary signs were erected. One (S59) was cast in 1926 but it had to wait 6 more years on his lordship till 1932. It survived WW2 with 2 or 3 bullet holes and was renewed in 1953. It still stands where notice 41 once stood at Mossy Lea. 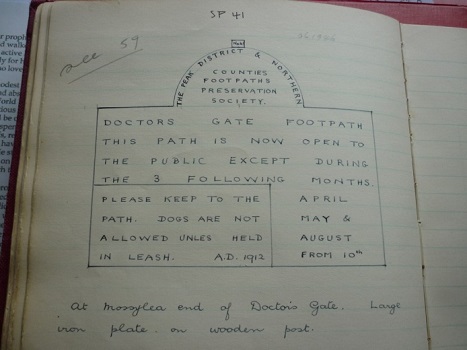 Due to WW1, when the society was suspended, no signs were erected from 1915-20, but then, at the age of 24, Harold Wild became Inspector of Footpaths and Signpost Supervisor. Harold, like Richard Pankhurst, was a man of principle. He’d been born in 1896, with a dislocated hip. This made one leg shorter than the other, so he was unfit for military service in WW1. Despite this, as a pacifist, he registered as a conscientious objector. He was called to a tribunal and spent a short time in prison. To be continued...